A Short History of the Mixed Race Irish struggle

Many of our members and friends are the children of African fathers and white Irish mothers. Our fathers were mainly students who travelled to Ireland from their homelands to study medicine, law, government administration and other subjects.

African countries who became decolonised in the early part of the 20th century needed skills to run their newly independent countries. The Irish government supported and provided funding for many of these students, especially in the 1960s. Many young Africans studied in the College of Surgeons, Trinity College and University College Dublin (UCD).

Some of these students fathered children with white Irish women and due to the stigma of illegitimacy and racism at the time their children were left in Irish institutions. Some of the mixed race children were adopted and many remained in institutions for their entire childhoods.

Many of these children suffered extreme racial discriminations and abuse while growing up in Ireland and some had to leave the country. We also saw a growing immigrant community and mixed race relationships and marriages in Ireland. Many families in Ireland were concerned at the racism faced by their children in the 1980s. This was a time of many street demonstrations by the anti-Apartheid movement such as the famous Dunne's Stores strikes to ban the importation of South African fruit.

As a reaction to these events and the realisation that we also had a race problem here at home we saw the first emergence of an anti-racism group called Harmony, set up in 1986. This included not only people of mixed backgrounds in institutions but also people and families in the general public. Jude Hughes ( Nigerian Irish ) was a co-founder of Harmony and continues the struggle through our organisation (AMRI) today. See more about Harmony in the link below:

Harmony campaigned to have race relations laws introduced in Ireland which were needed because of racial discrimination in the workplace, accommodation, education as well as general racism experienced in public. This resulted in a new Minister for equality being appointed which eventually lead to the introduction of some equality legislation, but not full race relations laws.

In the 1990's revelations of child abuse in Irish Industrial Schools started to emerge when documentaries were released on air such as Mary Raftery's 'States of Fears' and Louis Lentin's 'Dear Daughter' which told the story of Christine Buckley and her experiences in Goldenbridge residential school. Christine was the child of a Nigerian medical student and an Irish woman. She went on to lead the campaign to investigate Industrial schools which culminated in the Ryan Report of 2009 and Redress process intended to provide justice for thousands of former residents of Irish institutions.

In 2013 a group of mixed race Irish people, who had emigrated to the United Kingdom formed a 'call to action' campaign to continue the struggle for justice for racism experienced in these institutions. Although this aspect of abuse was identified in the Ryan Report the damaging impact of racism on institutionalised children was not addressed. In 2014 four members of the group (Evon Brennan, Carole Brennan, Rosemary Adaser and Conrad Bryan) prepared research on our mixed race community and the impact of racism experienced by mixed race children in institutional settings.

With the support and guidance of an Irish politician called Dominic Hannigan TD, in October 2014 three co-founders, Evon Brennan, Carole Brennan and Rosemary Adaser presented our findings on the impact of racism to the Justice and Equality Committee at the Oireachtas (Parliament) in Dublin as reported by the Irish Times below: 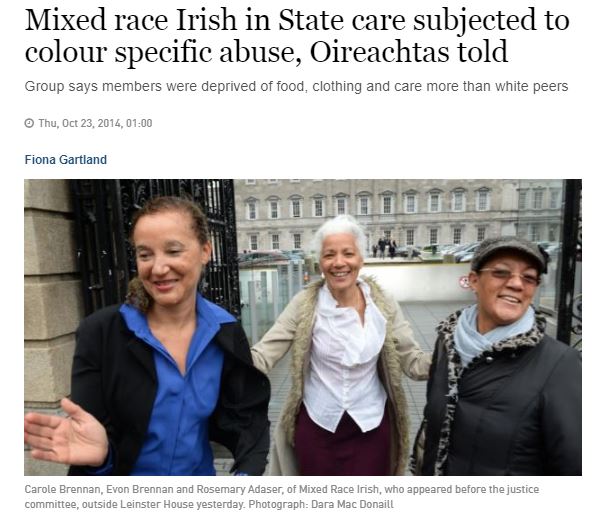 Following the revelations in 2014 of a mass grave at the Bon Secours mother and baby site in Tuam Galway the government set up a commission of enquiry to investigate mother and baby homes across Ireland. The mixed race group actively lobbied the Irish Government to investigate the treatment of mixed race children in mother and baby homes. Carole Brennan, Rosemary Adaser and Conrad Bryan met with the Minister for Children James Reilly TD supported by Maureen O'Sullivan TD to discuss our particular issues.

We were pleased to see that the Minister responded in 2015by including a clause in the Statute obliging the Commission of Investigation to identify cases of racial discrimination in the Institutions. We had carried out a limited research about our community ourselves but we needed a fuller investigation to really get a better understanding of what really happened to mixed race children in these institutions and the numbers that passed through the system. This was an historic landmark in Ireland. The clip below refers to our group and work in the Dail debates at the time:

Below Conrad Bryan speaking with media in Dublin outside the Dail (Parliament), following the announcement in Jan 2015 by Minister James Reilly that systemic racism will be investigated by the Commission of investigation into Mother and Baby Homes.

In December 2019 AMRI brought their case to the UN Office of Human Rights ( OHCHR) in Geneva and submitted a Shadow Report to the UN Committee on the Elimination of Racial Discrimination (CERD) session in Geneva. The result of this was that CERD made a clear statement and Concluding Observation on the actions the Irish State should take to meet the Convention in relation to mixed race people in Irish Institutions. Importantly for the first time a UN body has specifically named 'Mixed Race Irish' as an ethnic group who needed protection under the Convention. 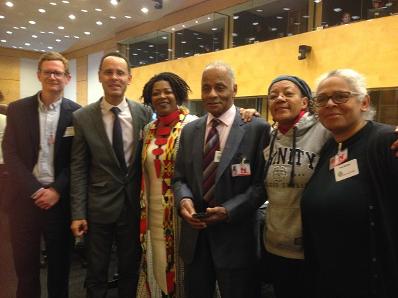 The AMRI delegation in the photo above included from left to right, Dr David Keane, Associate Professor at School of Law and Government at Dublin City University (DCU). David is an expert on the International Convention on the Elimination of All Forms of Racial Discrimination (ICERD). He has been instrumental in the preparation of our Shadow Report and has been an invaluable adviser to us on CERD and friend to AMRI. Conrad Bryan (2nd from left), Jude Hughes (3rd from right), Rosemary Adaser (2nd from right) and Phil Mullen (far right). Ms Verene Shepherd (3rd from left) was the Rapporteur who represented Ireland on the Committee.

The Summary Record of 2784th and 2785th sessions of CERD in Dec 2019 included the following statements from the Committee members Ms Verene Shepherd, Ms GayMcDougall and Ms Rita Iszak-Ndiaye:

The Concluding Observation statement made by the UN CERD committee in Dec 2019 following our representations made in Genevawas : 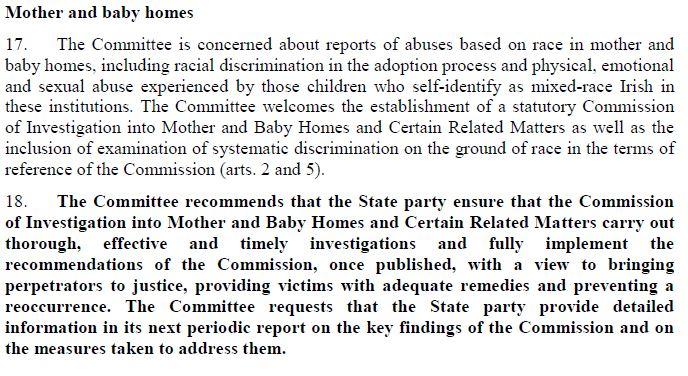 We had hope the UN would support our campaign to seeking a thorough investigation to establish the truth about how mixed race children were treated and also to seek justice. The UN has supported our case and named us in their reports. These statements above from the UN to the State go some way to put the spotlight on the Irish Government in respect of mixed race Irish issues and racial discrimination which we hope will ensure the Irish State takes seriously the findings and recommendation of the Commission of Investigation into Mother and Baby Homes.

The Closing statement from The Irish state at the CERD session was made by Ms Oonagh Buckley, the deputy Secretary General of the Justice Dept. on behalf of the State, was as follows:

“Finally I wish to speak to the issue of our fellow citizens of mixed race and their treatment in Mother and Baby Homes. The Minister would have wished to speak to this issue yesterday because I think it’s fair to say we have reflected very strongly on the powerful shadow report that was prepared and the testimony the Committee heard”. She went on to explain that no decisions can be made by the State on complex issues until the Commission of Investigation completes its report.