"2018 marks 100 years since the birth of Nelson Mandela. In Ireland this year, we are also celebrating 25 years of diplomatic relations with South Africa. To commemorate these milestone occasions, the Department of Foreign Affairs & Trade, along with the Apartheid Museum of South Africa have brought From Prisoner to President: The Nelson Mandela Centenary Exhibition to Kilmainham Gaol, for a period of 6 months, to January 2019. The exhibition is open to the public free of charge and tickets can be obtained through Kilmainham Gaol: http://kilmainhamgaolmuseum.ie/

“This exhibition celebrates the life of Nelson Mandela. The exhibition examines the themes which define in many ways his life, as a Leader, as a Comrade in struggle, as a Negotiator, as a Prisoner and as a Statesman. It highlights too, the strength, breadth and depth of Ireland’s relationship with South Africa, from Ireland’s support for the anti-apartheid movement. And I have to say that support began with the brave efforts of principled opponents of racism, and it evolved then to become an agreed position of both Government and opposition.” 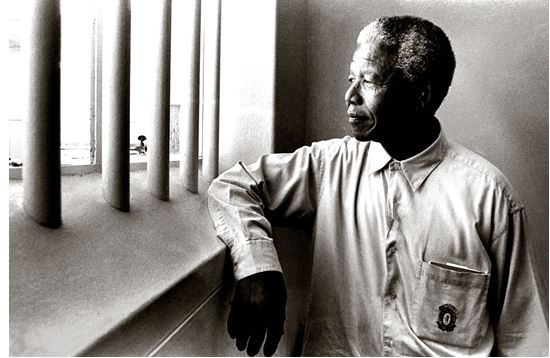 Many South African students travelled to Ireland to study medicine in the RSCI. Some stayed on in Ireland and others fathered children with Irish women who remained on to grow up in Ireland as Irish citizens. See the blog article by the RCSI at showing the ceremony to honour Mandela. Extract shown below.

Known and loved around the world for his commitment to peace, negotiation and reconciliation, Nelson Rolihlahla Mandela (b. 18th July 1918) was South Africa’s first democratically elected president (1994 to 1999). Mandela was an anti-apartheid revolutionary and political leader, as well as a philanthropist.

To celebrate the centennial of Mandela's birth, we take a look back at when the Royal College of Surgeons in Ireland awarded him an Honorary Fellowship at a ceremony in Cape town, SA.

‘Education is the most powerful weapon you can use to change the world’, Nelson Mandela. 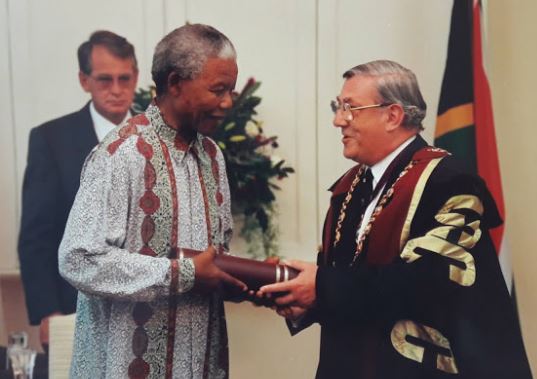 At a ceremony in Capetown a special bond between the College and South Africa was highlighted. In his citation honouring Mr. Mandela, the Vice-President of the College, Mr. Peter McLean recalled that many South Africans graduated from the College. “Over six hundred of our graduates are from South Africa. Many of them had to make huge sacrifices and struggle hard to acquire a medical qualification in Ireland. Most of them managed to return to their own country during difficult times to serve their communities. In that context then, it is particularly fitting for us to enroll President Mandela as an Honorary Fellow of our college”.

On completion of his education Nelson Mandela “sacrificed a lucrative legal career for active membership of the African National Congress. A policy of democracy and non-racialism reflected his deepest conviction. The entire thrust of his energies and efforts went towards freedom and fulfilment for all African people in their own land. In the harsh climate of Apartheid this soon led to arrest. Twenty-seven years in prison followed in dismal conditions, which would have robbed an ordinary man of his spirit and dignity.

On Sunday afternoon, 11th February 1990, after ten thousand days incarceration, he strolled through the prison gates, viewed by a world audience that was truly overjoyed. His beautiful words to the crowds will be immortalised – “I greet you all in the name of Peace, Democracy and Freedom, not as a prophet, but as a humble servant of you the people”.

He was awarded the Nobel Peace prize in 1993.

“In attempting to describe the career of President Nelson Mandela, language becomes speechless. I simply invite him to enter the Roll of Honorary Fellows of the Royal College of Surgeons in Ireland and in so doing to honour and enrich our College and our people.

“During the dark days of apartheid your College provided places for many South Africans who were excluded by racist laws form the medical schools of their own country. More than 300 of the South African doctors practising medicine in our country today graduated in Dublin between 1950 and 1990.

Through these doctors, you are making a contribution to the healthcare needs of our people. As a college that is more than 200 years old, you have produced surgeons and physicians who have gone to many parts of the world including South Africa. I would single out especially the Irish religious doctors and nurses who worked in the past, and continue to do so today, among disadvantaged communities. They understand that health care, if it is to serve all the people, must begin with primary health care; and that is should form part of broader socio-economic programmes.

In conclusion, may I thank you sincerely for your offer of a scholarship to be held at your College by a South African wishing to study medicine. Like the educational assistance provided by the Irish Government, this scholarship indicated the desire of the Irish people to see South African succeed in its endeavour to build a better life for all. We are indeed grateful.”

Coincidentally, that same week, President Mary Robinson was on an official Irish State visit to South Africa where she gave an address to a joint session of the South African Parliament in Cape Town. "