Back to Current News

Dáil Éireann Debate Vol. 942 No. 2 Unrevised 11 o’clockDeputy Maureen O'Sullivan: We meet so many people, individuals and groups in our political lives, and there will always be some who will make a significant impact on us.For me, some of those people are the women I met from the Magdalen laundries and from the Association of Mixed Race Irish. I met the latter group several times over the years and with them I met the then Minister, Senator James Reilly.For me, it was the additional burdens, heartbreak and pain for those in these institutions who were of mixed race. I know Rosemary Adaser has been speaking in the media about her experiences, which are very similar to the others from the group whom I met.The commission of investigation is specifically examining if any group was systematically treated differently on any grounds, including race. The association is satisfied that this has been included. However, this has to be included in the terms of reference drawn up for any investigation involving children or institutions. There is also a need for suitably-qualified people to assist in investigations into race.The Association of Mixed Race Irish has wanted to see the interim report to examine if its members' issues are being adequately addressed. Their admission files to mother and baby homes listed their colour under the section "Defects". Regrettably, the Ryan report did not deal directly with race. The group also wants to know the numbers of mixed-race infants who passed through all of the mother and baby homes, particularly St. Patrick's mother and baby home on the Navan Road. All these questions have to be answered and all these issues addressed.This means the terms of reference have to be wide and flexible enough, particularly with sensitive handling from trained professionals. I know some people will want to speak in public, but others will want to do so in private. Both have to be respected.Following requests from survivors who objected to the word "home" being used as they find it offensive, we had a discussion with the Minister. I know from that exchange that she was aware of the emotional impact of using that word to describe an institution of horror.  Under the Equality Act, any investigation with children in institutions has to include race. If there is a need for a criminal investigation, then it should happen. Will the terms of reference do? What is necessary to get to the truth to get justice for everybody involved? At times when we feel that is the worst we can hear, something else emerges much worse. One of members of the Association of Mixed Race Irish has stated: The Dublin health authority’s mother and baby home made many references to my colour in reports for no obvious reason other than to note or highlight racial bias. For example, two psychiatrists’ reports in 1967 referred to me as "dark-skinned" in the first one and "coloured" in the second. The question is: what relevance did this have in a medical report? The admissions ledger at the industrial school had "coloured" in one of the columns and also in the heading "admissions reform". [That did not apply to children, say, with red hair or white skin.] The last point the person made was "I don't know how I survived this place" and then "After spending four years at St. Patrick's home, I was sent to an industrial school." The members of the association are remarkable people in the context of what they have come through and the way in which they have survived. We owe an awful lot to them to get to the truth.

Below are a couple ofRTE YouTubeclips of Rosemary talking about her experiences of growing up in an Irish Industrial School:

Lorraine Maher launches 'I am Irish' project at the London Irish Centre during Black History month to highlight Irish people of mixed race. This was the first mixed race celebration at the Irish Centre in London.  See this wonderful launch on the 'I am Irish' YouTube clip below:

This book reading event took place in the London Irish Centre to launch Professor Elizabeth Anionwu's Memoir: 'Mixed Blessings from a Cambridge Union'. This event was also an opportunity for followers of AMRI to learn more about issues affecting mixed race people. Professor Bryan Fanning from UCD in Ireland came over to give a talk on his upcoming book about immigration and racism in Ireland. Historian Dr Joseph Healy also gave a talk at this event also. See some recordings below. 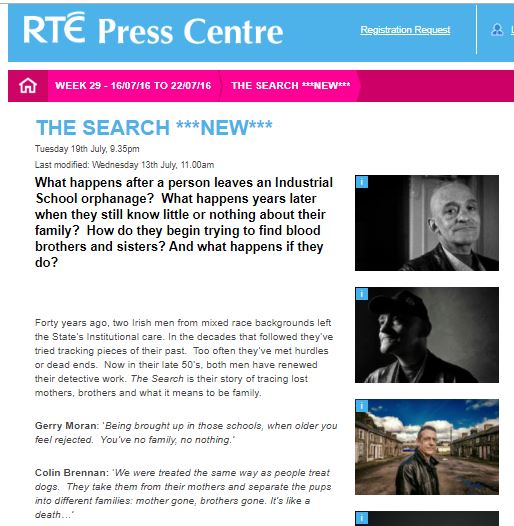 For the first time in Irish history, the issue of race will be looked at as part of a Commission of Investigation. Judge Yvonne Murphy will be required under law to identify cases of race discrimination against mixed race children who resided within the 14 Mother and Baby Homes across Ireland. This was a good day for our campaign and most survivors who attended an emotional private meeting with Dr Reilly after his press briefing.

Above Conrad Bryan speaking with media in Dublin following the announcement my Minister James Reilly that systemic racism will be investigated by the Commission of investigation into Mother and Baby Homes.

For too long, our legislators have given lip service to the issue of racism in Ireland and MRI have met with and lobbied Dr James Reilly to include a special examination of institutional racism within these state or religious run Mother and Baby homes.

We are also pleased that they have included within article VIII children of Traveller identity and babies with disabilities as well as discrimination based on religion.

This is an endorsement of our work and an encouraging sign that in today's Ireland issues of race and minorities are now being seriously considered at the highest level, and to further support those NGO's working hard on a daily basis in our communities. The fight against racism now must be fought vocally in the Dail not only by NGO's on the streets.

Along with several advocacy groups we lobbied for Vaccine trials to be examined, Welfare of mothers and babies in these homes, that the long-term impact of the treatment and decisions made in these homes be looked at, Institutional racism report, Mortality and burial practices access to all records and inclusion of St Patricks home Navan Road Dublin through which most of our pathways crossed, also why it appears so few mixed race children were adopted out and ended up with temporary/multiple fosterings or simply left in institutions for years. Whilst we did not achieve a separate reporting mechanism on racism, we are however pleased that, for each of the 7 specified areas of investigation, the Commission is to identify the extent of systematic race discrimination.

When we undertook this campaign I was advised, by a leading Irish academic on racism in Ireland, that our challenge will be the extent to which the state and politicians take the issue of race seriously, given past experience. Yesterday was a vindication of the work and commitment we have put into this, with the wonderful support from all our friends. Thank you

I would also like to thank the Irish Times and the Irish Examiner for helping us to raise the issue of Mixed Race Irish in the media. However, I do question the motives behind the Irish Independent's refusal to give any coverage at all to this issue in their national paper. This is somewhat puzzling and disappointing.

In any case, I was pleased to be in Dublin yesterday to receive the Terms of Reference and would like to thank Minister James Reilly for hearing us and including our issue. Finally, I would like to thank the politicians who have backed us such as Dominic Hannigan TD, Maureen O Sullivan TD and Anne Ferris TD and the many other deputies from all parties in the Dail who support our cause.
However, it was really unfortunate that Magdalene Laundries were excluded from this investigation which is a lost opportunity to give justice to these women who suffered in these institutions. I hope they get justice some day.

The next stage is to "pass the bill" in the Dail and Seanad after debates in these houses.

Co founders Evon Brennan, Carole Brennan and Rosemary Adaser present the case of racism in Irish institutions to the Committee, with members of the group in the background. 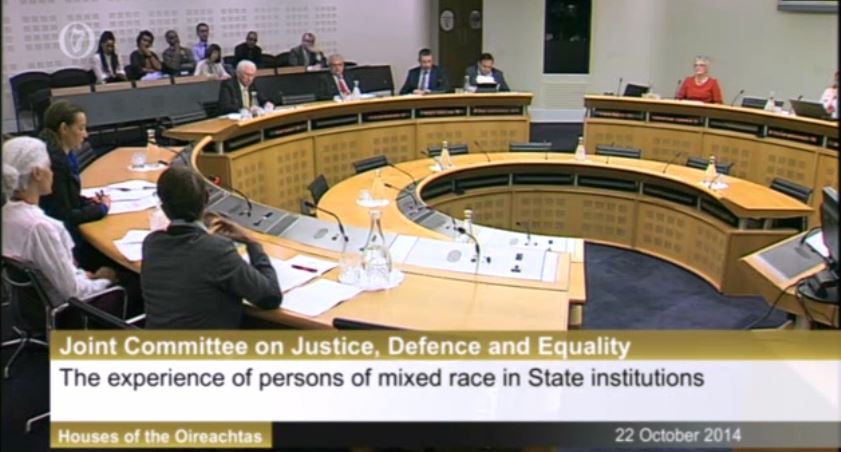