This page is about our campaign at the UN in Geneva

Videos of the 100th session of CERDin Geneva

In December 2019 a delegation of 5 people from AMRI attended the 100th session of the Committee on the Elimination of Racial Discrimination at Office of the UN for Human Rights in Geneva. This session is for States such as Ireland to explain to the committee ( CERD)  how they deal with racism in in their country and how it complies with  Human rights laws and the Convention. Ireland is accountable to CERD on issues relating to racial discrimination and it submitted its 8th Periodic report to the committee for this session.

These sessions are also open to NGO and civil societies to attend, though they are not allowed to speak at the session. However NGOs are allowed to submit their own 'Shadow Report' so that the Committee can hear the arguments and give evidence of racial discrimination they experience. AMRI prepared and submitted its 'Shadow Report' for this session.

The AMRI delegation also met the Rappateur in private before the Session began and each member spoke and gave voice to their experiences so that Ms V Shepherd , the Rappateur on the Committee, could hear fist hand what our personal experiences were, to reinforce our case set out in the Shadow Report. AMRI was the only NGO to have had a private meeting before the session before proceedings started. The Videos below and resulting Concluding Observations made by the Committee shows the significant impact AMRI made at this 100th session. AMRI achieved its objective  to have the issue of the Irish mixed race community considered for the first time at UNCERD.

This is the opening section of the CERD session and gives some context and explanation of what the session is about and how it is conducted over two days. Minister David Stanton TD's opening talk.

This is part of the opening statement from the Rapporteur Ms V Shepherd, who refers to mixed race children in Irishinstitutions as reported by AMRI.

Ms GayMcDougall a member of the Committee talks about 'Inclusion' of mixed race Irish people and whether Ireland really knows what inclusion means.

Mr Alexei Avtonomov (from theRussian Federation), a member of the Committee talks about self identification in relation Traveller community but he also refers to people of African descent who are not migrants, and asks which institution covers them.

Finally, at the end of the State's Closing statements, Ms Oonagh Buckely acknowledges the issue of mixed race children in mother and baby homes.

The delegation shown in the photo below included from left to right, Dr David Keane, Associate Professor at Dublin City University(DCU) . David is an expert on the International Convention on the Elimination of All Forms of Racial Discrimination (ICERD). He has been instrumental in the preparation of our Shadow Report and has been an invaluable adviser to us on CERD and friend to AMRI. Conrad Bryan (2nd from left), Jude Hughes (3rd from right), Rosemary Adaser ( 2nd from right) and Phil Mullen (far right). Verene Shepherd (3rd from left) was the Rapporteur who represented Ireland on the Committee. 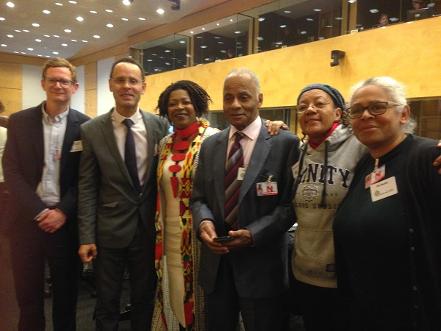